As published in the LA Weekly:

On March 17, 2020, my gyms were shut down when the County of Orange ordered us to stay home due to the COVID-19 pandemic. I watched the news that night and thought about the impact it would have on people’s lives.

My gym – The Strength Co. – helps people of all ages gain strength through resistance training because we believe improvements in physical strength can improve everyone’s health and well-being.

That night, I not only wondered how a shutdown would affect the strength of my members – the thing we have directly helped them gain – but I also wondered how it would affect their minds. Strength training is not just a physical release for people, it’s also personal growth. And now, more than ever, people were going to need to keep growing.

It wasn’t about me anymore. It was about my members. It’s always been about our members. In watching the news that night, it became very clear what had to be done.

I needed to empty out my gyms and take the weights to the people.

I am a former Marine Corps officer and current Marine Corp Reserve. In periods of crisis I can hear my training in my head:

It’s not about me, it’s about the Marines.

I opened The Strength Company in 2017. And I had one purpose in mind – to help others get strong. The Strength Co. is not merely a place to “workout,” or a place to “exercise.” It’s a place to help people get stronger. Everyone who trains there believes that they need to be strong – we help them get there. 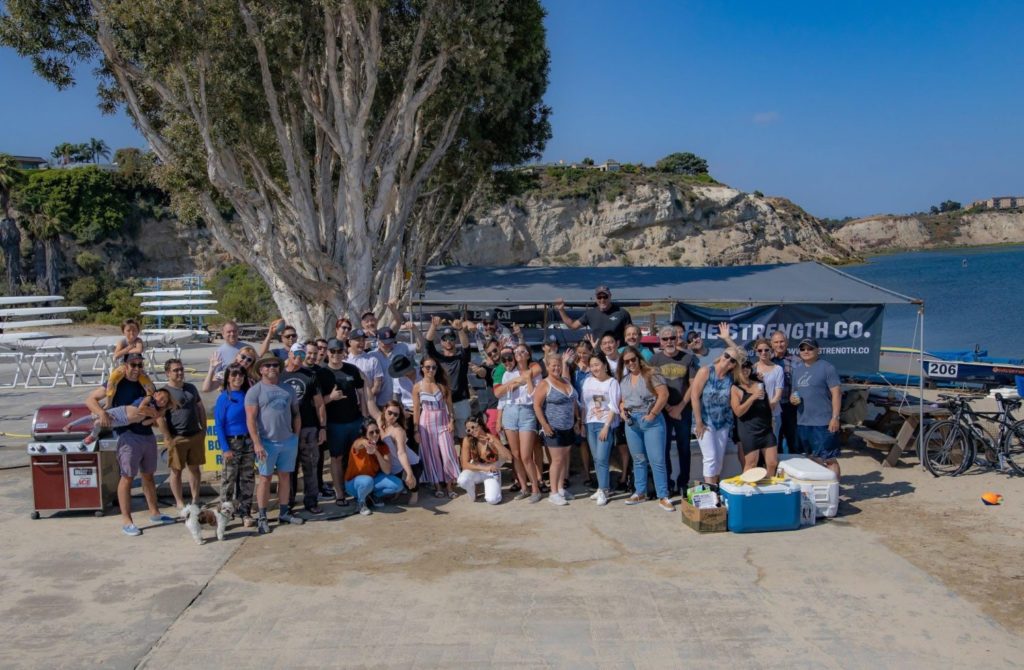 It’s a different kind of place.

And it’s a place where the coaches genuinely care about the people. Ron, Andrew, Elsa, Jules, Mike, Dylan, Jeff and Connor. Our coaches care about each lifter in their classes. When I began hiring staff, I sought out people who not only believed in strength training, but also genuinely cared for people.

After deciding we had to help our members continue to lift during this crisis, I went with a Marine buddy of mine to the gym and at 6:45 a.m. in the morning started taking everything apart. We unbolted racks, took the concrete screws out of the floor and disassembled everything.

I took every fixed asset I had, around $100,000 worth, and loaded it all in the backs of pickup trucks. Because we only had 8 racks in each gym, with only 2 gyms, we were only going to be able to outfit 16 homes. We have 160 members. We had to make a few calls.

We began calling warehouses. We began calling other gyms. We asked for weights and squat racks as I realized barbells were becoming very valuable. Prices had been raised and people were being ripped off. On Thursday March 19, 2020, just one day after we had closed our gym’s doors, I had purchased 3,000 pounds of weights.

We began delivering equipment and weights to our members, but ran into a problem when we ran out of squat racks.

So we started building squat racks.

There we were, in the middle of a pandemic, not knowing when our business was going to reopen and we were giving things away.

Marine friends heard what we were doing and they came and helped. Coaching staff stepped up to the plate. It reminded me of my days as a Marine Corps officer, deploying artillery. The captain would head out first, secure the location and then call back to his men, “Come and execute the mission.” It was the captain’s vision, but his men executed it.

This was my vision, but together my staff executed it.

Coach Mike was in charge of setting up the installs. Coach Jules rode shotgun as we went house to house delivering equipment in facemasks and gloves. Coach Elsa started calling each member every day to check in on them. Coaches Dylan, Andrew, Ron, Jeff and Connor began running the online coaching.

Not only were we installing gyms in people’s homes, we were giving them the same service they had when they were in the gym: live, one-on-one coaching.

A local business owner buddy of mine asked, “What are you going to do when this is all over? How are you going to get all your stuff back?” I told him I had no doubt that the day we say we need it back, every last pound will be delivered to the gym.

And this was the right thing to do right now.

OUR PEOPLE WILL BE STRONG

Last month I had a business plan and was ready to sign a lease for what would have been my third gym’s location in Lake Forest. Today, both of my gyms are completely empty. Well not exactly true, one of them is now manufacturing steel squat racks. But when the shutdown order from the county arrived, I thought, “What do I need to do?”

I needed to do the same thing I would have done if I were in combat. I needed to take care of my people. I needed to lean on my staff and the people who believe in what we’re doing. I needed to tell them that I needed their help.

I needed to continue keeping our members strong and improving people’s lives, and I needed to provide a service and a value to my clients and members. That’s why we’re here.

I’m not here for the sales or to make a fortune. I truly believe in strength training, and that is at the heart of why I opened a gym. It’s why my mom and dad train. It’s why I was willing to empty my gyms and give away every fixed asset I had. I believe this isn’t optional. If you want to survive, you must have strength and I had to keep my members training.

If this pandemic lasts for months, I can say one thing: our people will be strong. We’ve outfitted nearly 100 home gyms in Orange County and the L.A. area in the last three weeks. The Strength Co. family is a strong family – and it’s always been about the members.